Making progress on the recipes and ingredient list(s), still many to go though. Have all the dressings, sauces, seasonings, starters and salads. Now on to entrees, sides and desserts.

Went downtown yesterday to check on the roof, coming along fine. Went over books and expenses with office then back home to cook / test more. Minimal porch time, too much to do.

Today mostly same thing. Went downtown to check on things, cut some checks for labor, checked on things, etc. On the way there Arquel flagged me down - five pounds of fresh spider crab just off the boat. Score. Was going to make the seafood stuffing recipe this weekend and needed crab bad. Perfect timing.

After covering all the bases, stopped and had a beer and played dice for a little bit - haven't done that in quite a while and going to be working all night so decided what the heck. Won $20, had fun, then back home to the kitchen.

On the way out met up with Sharon (she also works at the coffee shop across the street), she's excited about sushi grand opening - planning details and logistics, everything falling into place.

Everything going fairly smooth and mostly according to plan - can't complain.

Had a cool thing happen -Sharon said she had $50 dollars for me from Alexis, he dropped it off the day before. He's one of the little island kids that I've kind of taken under my wing and watched grow up for the last 4 years - probably 12-13 now. I give him rides all over town when I see him, buy anklets from him, tease him about doing his homework, etc.

Well, the other night he asked me if he could borrow $50 for his school fees. They were $250, he had $200, needed $50 more. Normally I don't do that but I went ahead and loaned it to him. He promised to pay me back, we shook on it, he dashed off. I wondered if I would see it again.

When Sharon handed me the rolled up wad of cash wrapped in a little piece of paper he had left for me I just melted. Really warmed my heart - I know there's a lot of bad out there in the world but there's also a lot of good. One good true soul can compensate for scores of bad ones, don't you think? That little kid made my day...

That would have made my day as well!

I'm just a new reader that likes to keep up on things going on in Belize. I'm kinda a fan of the island. I'll have to try eating at your restaurant next time I'm in town! 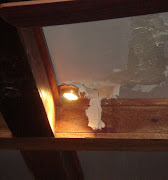